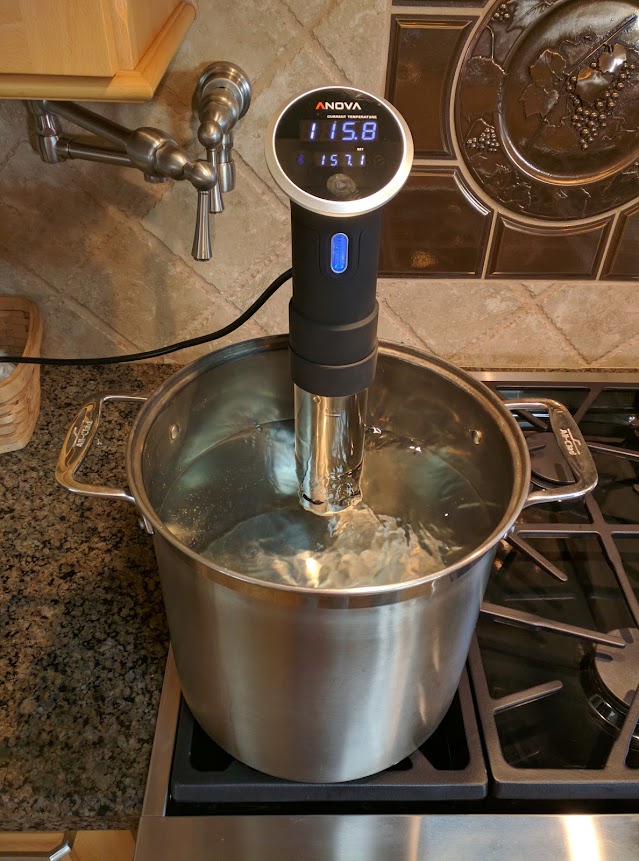 After years of passive enchantment with sous-vide cooking, my wife bought me an Anova immersion circulator for my birthday so I could finally try it at home. Despite reading the book everyone recommends, I was still left with a bunch of newbie questions that didn’t have immediately obvious answers. I forged ahead with a mix of phoning a friend, asking the Internet, and just giving it my best shot, reciting the mantra that worst case the food will just be inedible. In the end, things worked out fine–though there’s much more experimenting to be done!

For the benefit of other first-timers, here’s some collected Q&A based on my experiences so far. I hope this will help remove a roadblock or two and help convince you to “take the plunge” (see what I did there?).

Q: How should I prepare the water bath? How warm should it be?

Turns out it doesn’t really matter, since the circulator can heat it up pretty quickly on its own. I just filled the pot with warm water from the sink, which turned out to be about 110°F. In my case, I was cooking at 142° and the circulator brought it up within several minutes. No need to heat the water on the stove or use a kettle first (remember, you’re almost always cooking at temperatures well below boiling).

Q: How high should I fill the pot with water?

Technically, it just needs to comfortably cover the food you’re cooking, but it’s nice to give it some buffer. The Anova has a min and max line and you need the water to be in between. One thing I hadn’t thought of is how much water can evaporate over a long cooking time (more on this below), so that’s another reason not to cut it too close. The circulator moves the water pretty gently, so there’s no danger of it sloshing over the top of the pot or bubbling over like with boiling water.

Q: If my meat is frozen, do I need to fully thaw it before starting the sous vide process?

Not if you’re doing a longer cook. For instance, I did 24-hour beef short ribs at 142°, and even though the cubes of meat were 2-3″ thick, there’s plenty of heat and time to fully thaw the meat and bring it fully up to temperature. That’s one of the beautiful things about sous vide–since it’s low and slow, you don’t have the same worries about unevenly heating the meat like you would on a grill. And most meat defrosting techniques involve placing it in warm water, which is exactly what you’re doing. I just pre-defrosted the meat in warm water for ~20 mins and then put it in the bags and had no trouble. This is handy since otherwise it can take a long time to defrost meat, which means you need to plan days ahead to cook it.

Q: Many books/sites say you can use Ziploc freezer bags to seal the food. What about Ziploc storage bags?

I had a minor panic attack when I realized that all of our gallon-sized Ziploc bags at home were “storage” not “freezer”. I obviously didn’t want to risk melting the plastic or rupturing the bag during cooking. But according to the Internet, both are plenty well qualified for the task, being made of heat resistant food-grade polyethylene. If the food isn’t sharp and pointy, you’re not going to poke a hole in the bag during cooking, and the water is not going to be anywhere near the melting point of the plastic. In the end, I decided to brave the storage bag and it seemed to work just fine. I’d probably still prefer a freezer bag if I had one handy (just to be paranoid), but I don’t think it’s required. Just remember in either case to get all the air out of the bag using the water displacement method, which you do right in the sous vide pot.

Q: How do you keep the bag from getting sucked into the circulator during cooking?

When I first started the cooking process, I just naively put my ziploc bag into the pot with the circulator clamped onto the side. Nothing in the book or the instruction manual said to do otherwise! But inevitably over time the circulator would suck the bag towards it, ultimately impeding the water circulation and making some weird noises. Definitely didn’t seem like it was working as intended. Turns out most people clip the bag to the side of the pot with a chip clip or clothespin. That fixed the problem. I have no idea why this isn’t specifically mentioned in any of the basic instructional material! 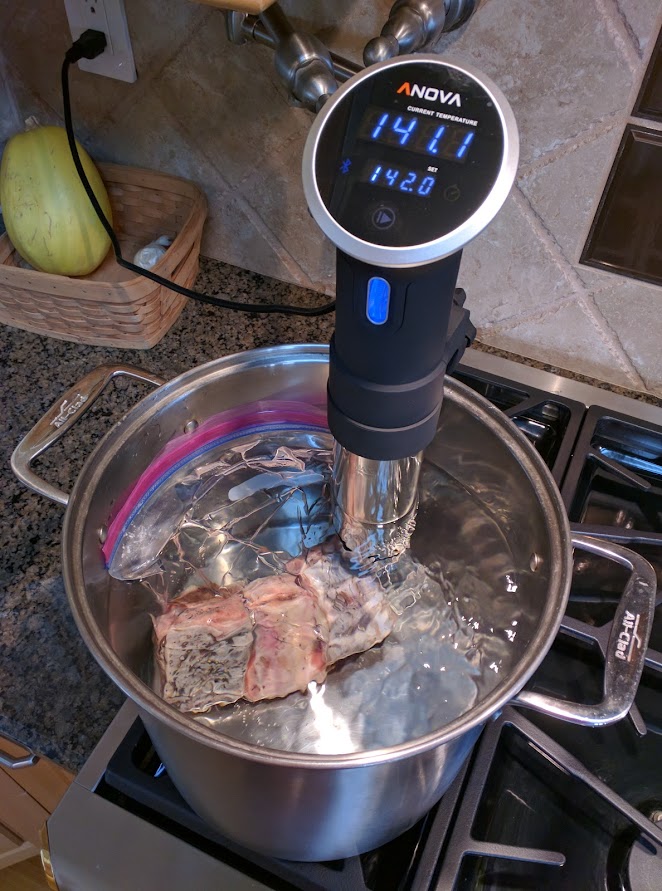 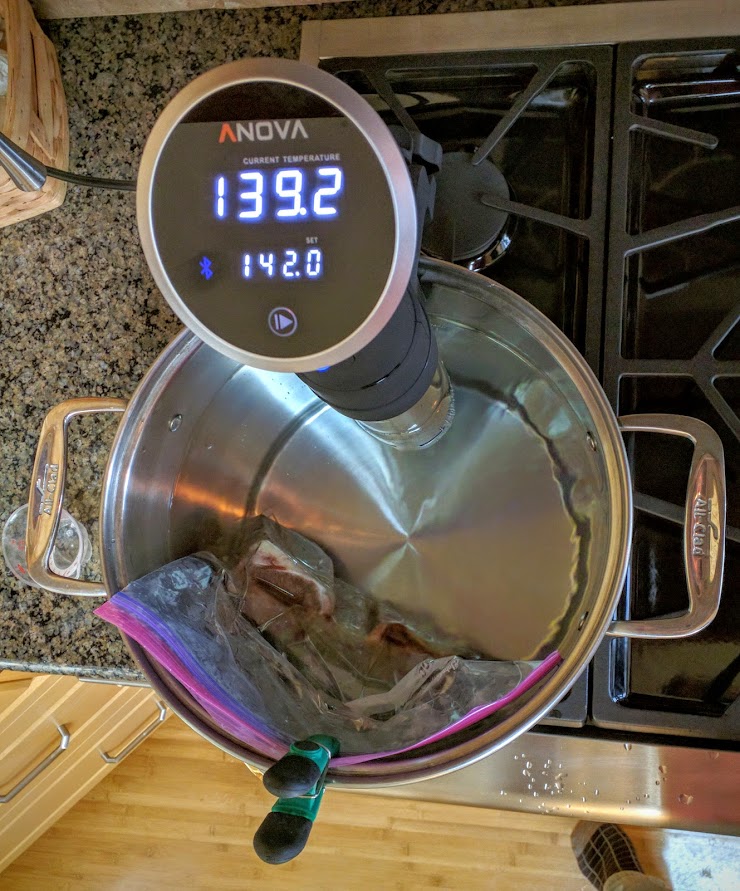 Q: Why does the circulator sometimes make a metallic grinding noise? 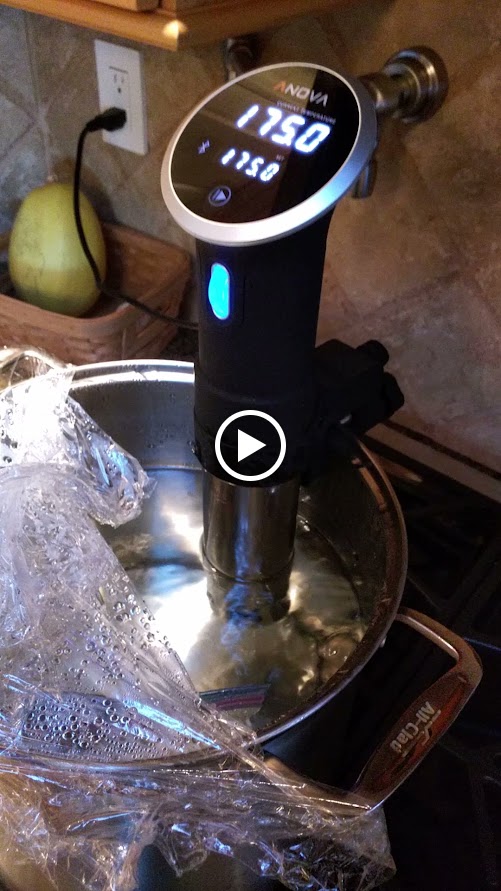 The instruction booklet said it means the case isn’t tight enough, but I couldn’t obviously tighten it or loosen it. It definitely sounded wrong though, so I tried a few more times and eventually got the right amount of twisting and pulling to remove the case and then reattach it with a satisfying snap at the end, after which point the sound went away. It didn’t seem to affect the cooking process to have that noise, but it was definitely somewhat worrying and annoying, so I’m glad I finally fixed it.

Q: If you set the cooking timer, will it turn the circulator off when the timer finishes?

No. The Anova timer is just FYI and does not control anything. It’s confusing that they don’t tell you that, but it means you don’t need to worry about the exact cook time, which is part of the point of sous vide (it’s hard to overdo it, since the water is the same temperature you want the food to end up at, vs. an oven or grill, which is much hotter). For instance, I’d planned for my short ribs to be done around the time I would get home from work, but my schedule is not always super predictable, and I didn’t want the circulator to shut off and let the water cool down if I came home later than expected. Fear not, it’ll just keep going until you stop it.

Q: Is it safe to cover the entire top of the pot with cling wrap to reduce water loss from evaporation?

A recipe I read suggested that I do this, but I wasn’t sure if that would cause lack of airflow or pressure to build up or something. Fear not, it didn’t seem to cause any problems, and it significantly reduced water loss from evaporation, which is especially important for longer cooking times. I let it cook over night uncovered and it lost an inch or two of water in the process, so if I’d let it continue all day, it might well have gotten down below the min line by dinner time. The only hard part was keeping the cling wrap from sagging down into the water (don’t want to cook it!), but by using some longer pieces, pulling them tight, and wrapping the extra around the pot handles and edge, leaving room for the circulator on one side and the clip on the other side, it was stable and effective. Definitely recommended. 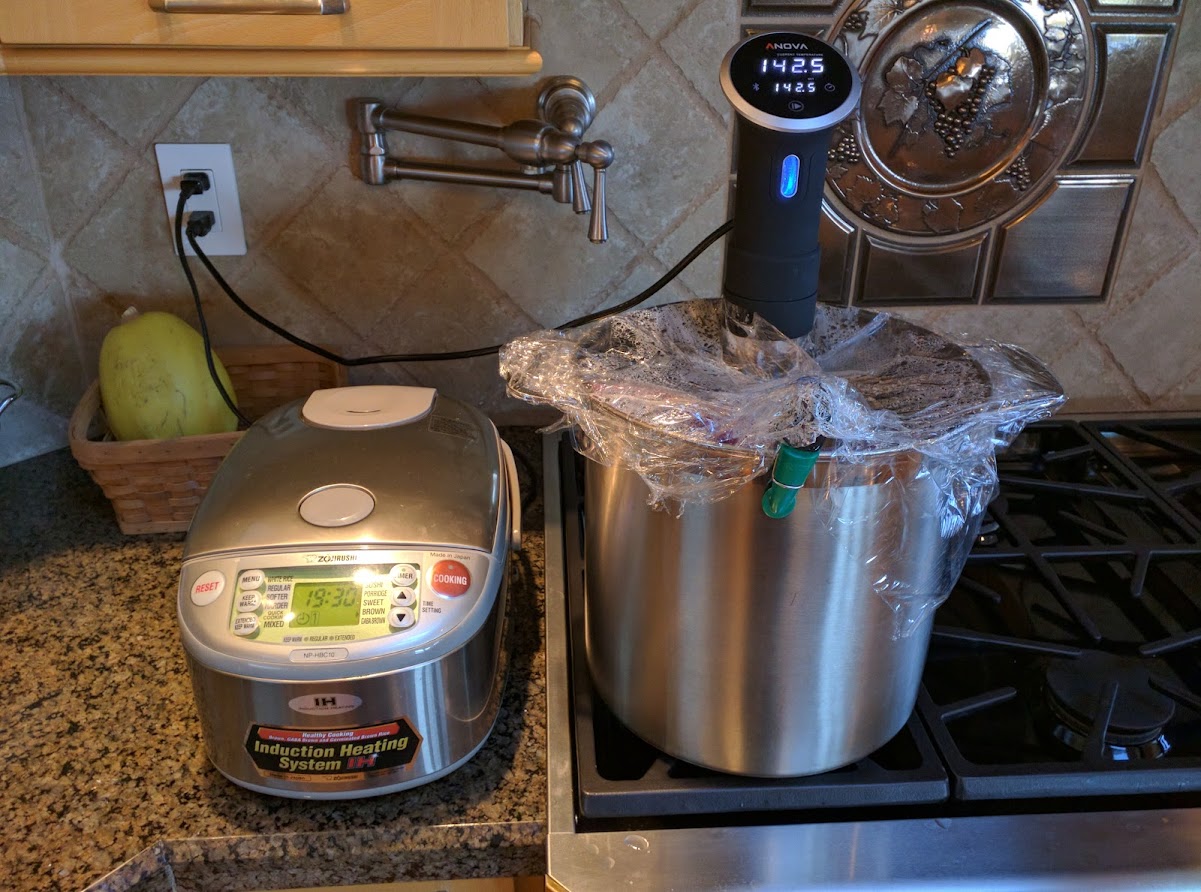 Q: What happens if the power goes out in the middle of cooking, esp. while you’re away at work?

You’re in trouble. 🙂 This happened to me, and even though it was only a brief outage, the Anova frustratingly does not restart itself after waking back up! So the water just slowly cools, leaving your meat under-cooked and potentially in the danger zone for bacterial growth. This is what I came home to, and at first I thought the meal was ruined. But after some research and talking to some scientists in the family, I felt a bit better. It usually takes at least four hours in the danger zone for bacteria to grow, and the meat had been cooking above that zone for many hours already, so most bacteria should have been killed by then. When the power went out, the water didn’t immediately cool, so it only spent some of the post-outage time in the danger zone. And most preparations call for searing the outside of the meat before serving, which re-kills anything that might have started growing on the surface. In the end, after much soul searching, I decided to crank up the circulator for a bit and then pull out the meat and sear it. The meat was not as tender as I was hoping (possibly because the cooking time had been cut short) but it was definitely edible and, as I write this the next morning, I have no indications that my stomach is any worse for wear. The advice from the Anova folks seems to be to buy a UPS battery backup and plug the circulator into that. 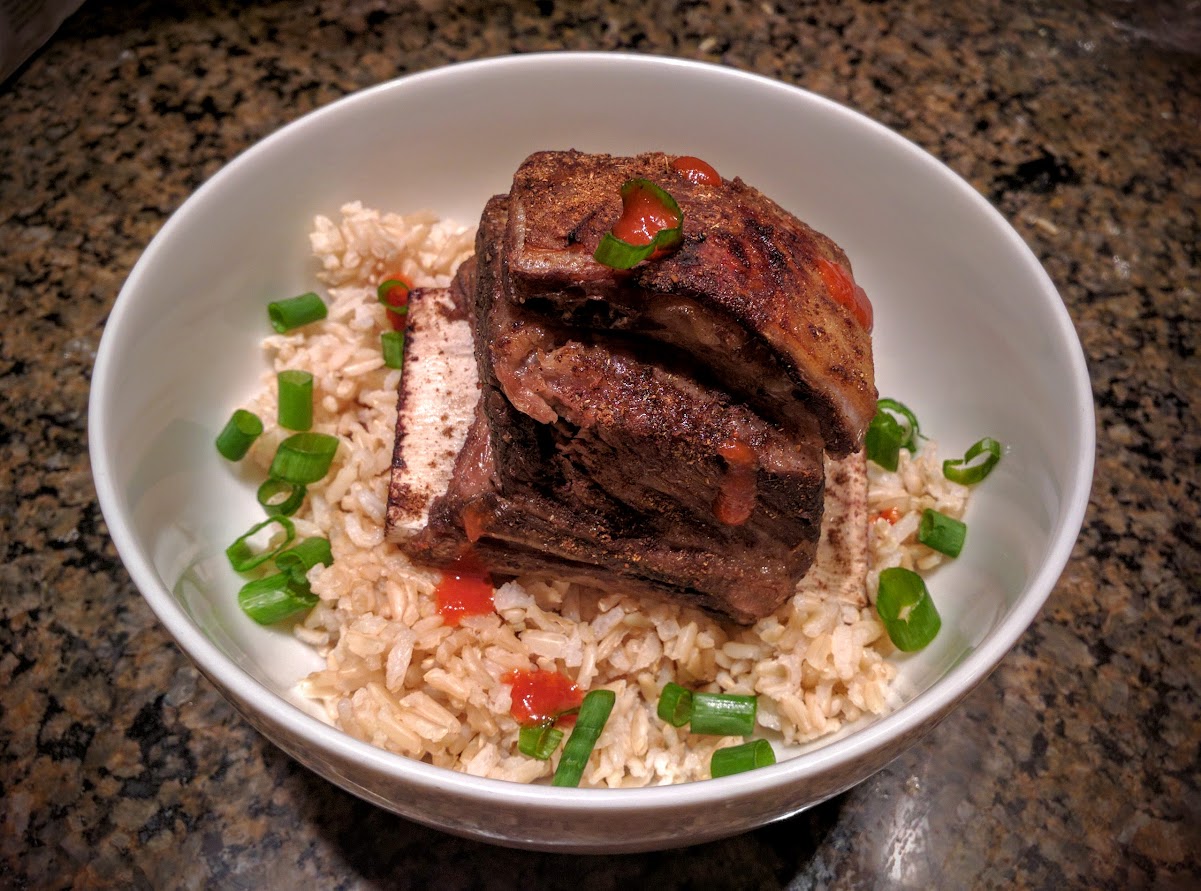 Q: Can you reuse the cooking water for a subsequent sous vide run?

The consensus on the Internet seems to be yes, provided the water is not obviously funky or contaminated. It’s possible some bugs could grow in it between cooking cycles, but you’re keeping the food sealed in plastic and turning the water back up to a temperature that will kill anything in there, so you should be fine. Hey, it’s drought-tolerant cooking! After my scare with the power outage, I wanted to “get back on the horse” and do another run for the next dinner. I could have poured out all the water and started over, but it seemed wasteful, provided I wasn’t risking my health. I’ll post an update if this turns out to be a mistake, but I don’t think it will. 🙂

The promise of sous vide is “set it and forget it”, which as an engineer I love. It’s precision cooking that’s not fussy on technique. And it can produce some pretty stunning, unique results. But the danger is that by cooking food at lower heat for longer time, you’re at greater risk of growing bacteria if you’re not careful. So most of the first-timer questions above ultimately boiled down to how to minimize that risk without giving up entirely. That plus stuff that I’m sure you get used to after you’ve been doing it for a while, but that’s not obvious the first go around, and that the books don’t tell you about one way or the other.  So I hope this addendum finds and helps someone. In the meantime, I’ll keep at it. And if you’re a home sous vide cook and have any tips to share, or if you found any of this useful (or confusing, or provocative), please let me know!