My Ajax talk is now on YUI theater 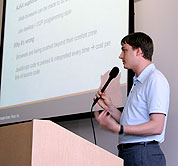 When I gave my talk on High-Performance JavaScript at OSCON in July, I found out that I was speaking right before “Chief Performance Yahoo!” Steve Souders. To be honest, I was a bit nervous–we read everything Steve writes at Plaxo, and he runs a whole group at Yahoo that does nothing but focus on web performance. But our talks turned out to be quite complementary, and we really hit it off as fellow evangelists to developers that “you CAN do something to save your users from slow web sites”.

When we got back to Silicon Valley, Steve said “let’s do lunch at Yahoo! some time”. So I went over on Monday and had lunch with him and JavaScript guru Doug Crockford (also at Yahoo!). Doug is actively working on how to enable secure cross-site mashups, something near to my heart, so we had a great discussion. When we were coordinating lunch plans, Steve had said “hey Joseph, as long as you’re coming over, why not give your talk at Yahoo!, and I’ll give mine again, and we can put them both up on YUI Theater“. And that’s just what we did!

It turns out that Yahoo! has a set of classrooms in one of its buildings where employees regularly come to hear various talks (both from fellow Yahoos and outsiders), so they had a great setup there, and the room was filled with several dozen fellow web hackers. Eric Miraglia, the engineering manager for YUI (which we use in Plaxo Online 3.0), personally videoed both talks, and we had a great discussion afterwards. He told me it would take “about a week” to get the video online, so imagine my delight when I saw it already posted this morning! (He must have heard about that whole “under-promise and over-deliver” strategy, heh).

I was honored to be invited to speak in front of a company like Yahoo! and to a group of people like Steve, Doug, and Eric who are absolutely at the forefront of web technology and are also true believers in sharing their knowledge with the web community. I’ve learned a lot from them all, and I think Yahoo’s recent work with YDN, JSON, and YUI is the best example of open and pragmatic involvement with developers I’ve seen at any big company in recent memory. After the talk, I asked Doug Crockford if I’d done right by him, and he said “that was really great–I only disagreed with one thing you said.” Wow–that’s good enough for me! 🙂